A day in the life of Dimitri Shostakovich's vinyl record album

Music is the theme that binds our society together. It connects our lives through time and space to better times. This old record has been sitting on my shelf for weeks. Yet it brought a moment of happiness to two people.

I use to collect old vinyl record albums, and now I can't seem to get rid of them. I don't listen to them. I just like looking at them. I have them piled in my doctor's office, hidden away in cabinets. On a monthly rotation, I pull out a few to display. The artwork makes me happy. Someone will look at my album and will see The Pretenders, for example, and think back to the time when they first heard it. 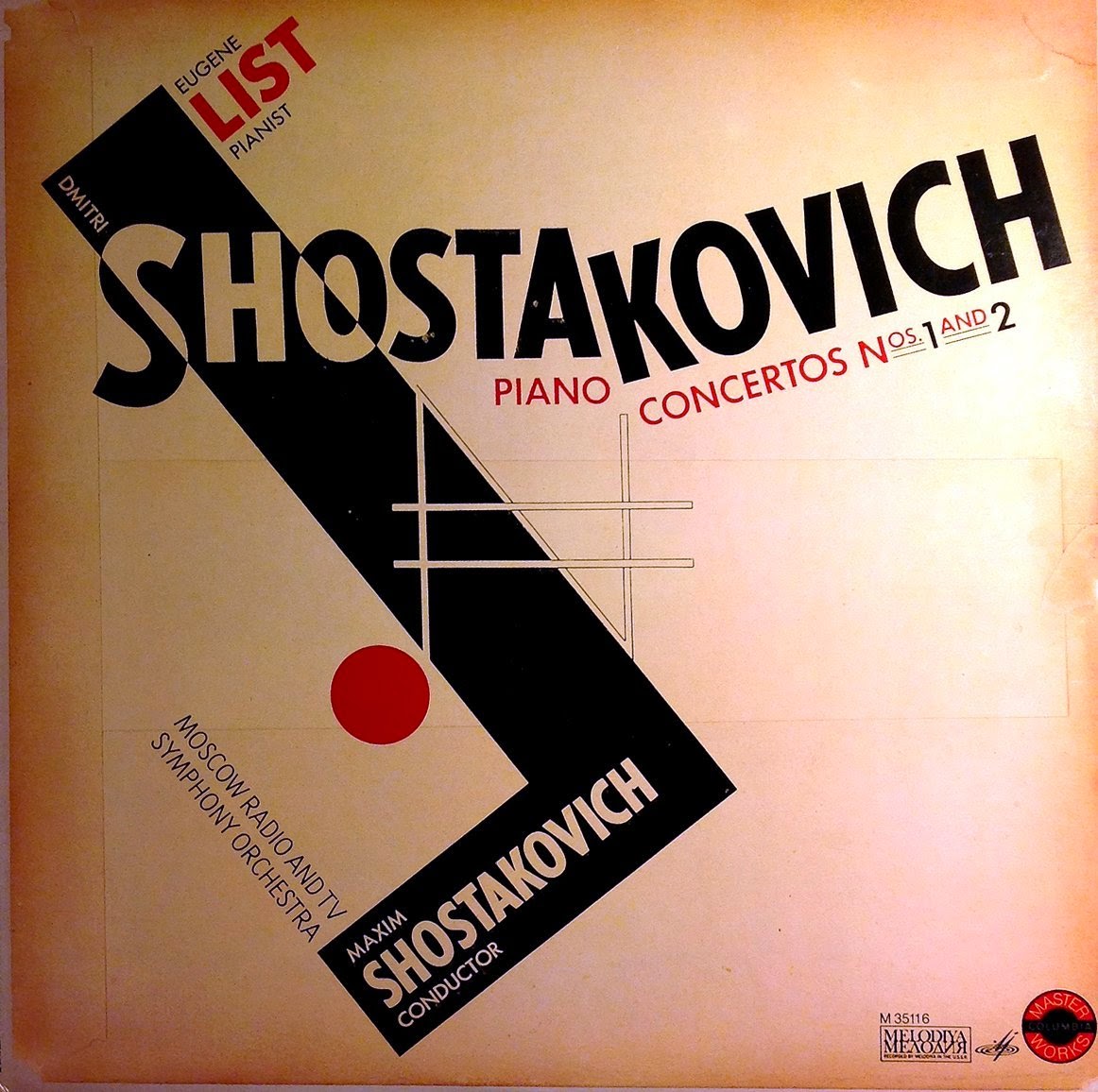 An old Russian woman was in my office today. We were going over her blood pressure medications. She looked over and saw one of my vinyl records, a 1978 recording of Dmitri Shostakovich's Piano Concerto Nos. 1 and 2, performed by the Moscow Radio and TV Symphony Orchestra.

"Is that Maxim?" she asks in a very broken English.

"Is that Maxim? Who is the conductor?"

I flipped over the record (the front was covered at the bottom) to reveal the conductor's name, Maxim Shostakovich.

"That's Dimitri's son," she says. In the most humble Russian voice you can imagine, "I know him. I made a film about him. He's living in America now."

She is no longer an old Russian widow with blood pressure problems. She is young Miročka, a journalist and well-known film producer. Her life is good. It is the 1960s. She is living with her husband in an apartment in Moscow.

She smiles at me with a young smile, and wishes me a good day, "Good health to you."

A few hours later a 91-year-old man was in my office. I had cared for his wife. He lives alone now. He has plenty of free time these days, now that he's widowed. I keep meaning to have lunch with him, sometime. I'm too busy at work. He was a professor in a biochemistry lab where he married his lab assistant. They'd been married over 50 years.

He looked over at my vinyl records. He sees the Shostakovich.

"Jeannie and I saw the premier of his 7th Symphony. It was in Chicago before the war."

I replied, "I don't think I've ever listened to that record, or if I have I don't remember. I just like the artwork."

"You should. I think his music is on YouTube. It's very powerful."

And then he starts singing it. He sings the 7th Symphony. In that moment, he's the young scientist on a date with his beautiful lab assistant. The music stirs his soul and he is happy.

I look at my schedule and realize I am busy the rest of the week. Perhaps we can have lunch next week.


Posted by ToasterPastry at 11:33 PM No comments:

My Dad Finally Gets His Birth Certificate

My father was born in Codington County, South Dakota, December 12, 1923. He was born at home. The physician who delivered him was not very good at keeping records, so no birth certificate was ever filed at the county office. He was baptized a few weeks later in a local Church. He grew up in Watertown, went off to college at the University of California, was drafted into World War II, served in the war, finished college, returned to South Dakota, started his own business, raised a family, and paid taxes every year, all the while continuing to live about an hour from where he was born.

A week ago he went to renew driver's license. According to recent state regulation passed by a largely Republican legislature, my father, now an 88-year-old man, was required by law to show two pieces of proof that he indeed lived at the home that he has been living for nearly 50 years. He showed two envelopes addressed to his home.

He was also required to show his birth certificate, the one he never had.

They say this was to limit voter fraud. To be fair, South Dakota was involved in such a case in 2002, where thousands of phantom votes were cast, all in the same handwriting.  But now the pendulum has swung in the other direction, About a year ago, the NAACP petitioned the United Nations, claiming that efforts to stop voter fraud are really schemes to prevent minorities from voting; in the case of South Dakota, Native Americans off the Reservations.  Some suspect that there will be voter suppression activities among conservative groups. The United Nations plans to send affiliated election monitors from Europe and central Asia to polling places around South Dakota, as well as North Dakota, Missouri, and New Mexico.

He just showed them his old Driver's License.

Posted by ToasterPastry at 8:56 PM No comments:

I Ate a Jack-In-The-Box Bacon Shake, and I Survived to Tell The Story

I ate a Bacon Shake at a Jack-In-The-Box restaurant, and I survived. To be honest, I’m still enjoying it. But I decided to put the rest of it in the freezer and write about my experience while the smoky flavor was still fresh on my palate. 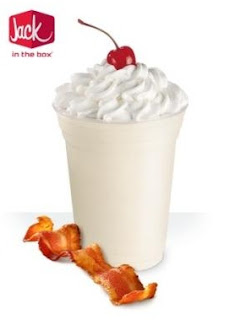 Before I discuss the nutritional content of this product, let me say this: it’s ice cream, people!! It’s a dessert item. Stop prattling about the nutritional content and start living. It’s got a buttload of fat and enough Calories to power a small city, so get over yourselves and go out there and drive your crazy car to the nearest franchise. I don’t want to hear any more references to an artery-clogging-heart-attack-in-a-plastic cup. You people need to get off your fat ass and start exercising. Stop reading the side panels of Girl Scout cookies in the hope that you’re going to get over the guilt of shoveling Samoas into your esophagus.  You don’t have to eat the whole thing.  Oh my, you just had one cookie and not three cartons? Good for you.

This is an important catastrophic corporate failure, and we all need to go out there and bathe ourselves in the gastronomic foolishness of this mega-stupid decision. Jack-In-The-Box, no doubt, skipped right over about three tiers of focus groups and brought out this menu item straight to the public. This is not failure like getting drunk and having your 9-year-old kid drive the van home.  This is not failure like getting a metal stud driven through your frontal sinus to make yourself look more attractive. This is corporate failure. This is failure on purpose. This is one giant fucking Fountainhead of failure. This is big company meetings and charts and graphs and PowerPoint presentations, and they’re all making hand-wringing decisions about a bacon-flavored shake. When big corporations stick out their collective necks like this, I’m jumping right into the middle of it because I celebrate risk.

Of course, Jack-In-The-Box relies on social media and word-of-mouth to sell their product. I’m playing that pipe. I’m here to tell you that it’s good. It’s not made with real bacon. It doesn’t have a bacon swizzle stick. It’s all artificial goodness that tastes like breakfast made with pancakes, bacon and maple syrup, and everything runs together and tastes a bit smoky, but sweet. It reminds me of a Saturday morning breakfast at Grammy’s house.

Jack-In-The-Box restaurant is a fast food restaurant chain based out of San Diego, California that features the typical hamburger fare.  The bacon shake is a secret menu item for a limited time. It’s not anywhere on the menu, on a poster board at the counter, or on a sign at the door. It’s secret. You have to suck-it-up and ask the pimply-faced kid at the counter. Maybe they won’t have it, but you’ll never know unless you ask.
Posted by ToasterPastry at 10:59 PM No comments: